vegan blog
Brought to you by Future Kind.
Vitamins built for Vegankind.
Your cart is currently empty! Most people that try to become vegan fail.

They fail because after years of routine, they make a very large change in their life very quickly.

It’s a hard truth, but it doesn’t have to be this way, because there’s a secret method called “habit modification” that will help guarantee you success. Here’s how it works:

In the best-selling book The Power of Habit, we learn the story of a man named Eugene Pauly. After contracting a virus that causes his brain to swell, Eugene loses much of his cognitive ability, including his memory.

Eugene couldn’t remember his children's name or the day of the week.

However, remarkably, despite Eugene literally having a hole in his brain where he lost tissue from the virus, he baffled scientists by still being able to carry out certain tasks, that would normally require memory.

For example, Eugene would frequently leave his house and go for a walk and then be able to find his way home.

How could he do this without the memory part of his brain?

This is the question that brought in a new realm of neuroscience and the discovery of another part of the brain that was responsible for one of our most powerful abilities: habit.

The coffee shop that you walk by on your way to work in the morning is the cue. Ordering the coffee is the routine. The boost in energy is the reward. Breaking this habit loop is extremely difficult, so the trick is to simply modify it.

How to Go Vegan: How You Can Use the Habit Loop to Become Vegan

By modifying the habit loop, we can seamlessly switch to a vegan lifestyle.

The key is to introduce these changes gradually. Many people like to start with meat first, then fish, then milk, eggs and eventually cheese.

Here are 13 tips that will help you make the switch quickly and easily. In the US, non-dairy milk sales have grown 61% over the last five years, while sales in the dairy milk category have fallen 15% since 2012.

One of the easiest switches you can make when becoming vegan is substituting dairy milk for almond, coconut or soy. While the taste will seem strange at first, after a week or two you’ll come to find it totally normal and eventually you’ll probably prefer it.

Most supermarkets and coffee shops stock alternative milks, which means you can easily modify your habits here.

If you’re used to eating eggs, rather than just cutting them out, try and switch to using something like Just Scramble or tofu.

The trick with tofu is to scramble it and add turmeric and paprika, to add both the yellow colour and flavour. The vegan community has been exploding with news about veggie burgers. Many people claim that they can’t even taste the difference between the new Impossible Burger and those made from beef. Beyond Burgers are also very popular.

Even if you’re out at a restaurant, many establishments now offer veggie burgers, whether high-end or at the local shops. Even McDonalds has introduced a vegan burger.

Becoming vegan doesn’t have to mean a sad salad sandwich or a lousy salad.

Throw some tempeh in there. It’s high in protein and probiotics. It makes a great meat substitute because of its texture.

For a delicious lunch, you can make a TLAT (Tempeh, Lettuce, Avocado and Tomato). It’s an explosion of flavour and very filling. Let’s face it, the meat in sausages has always been pretty questionable, so it’s particularly easy to make the switch here.

A vegan diet doesn’t mean saying goodbye to hot dogs, just use veggie ones. Check out Beyonds most recent sausage for some mouth-watering possibilities.

Ah yes, the favourite comment from our omnivorous friends, “but bacon”.

We agree, bacon is delicious... when it’s not from a dead animal.

We love Sweet Earths Hickory & Sage flavour “Benevolent Bacon”, made from seitan and packed with protein. Not to worry, grab some Earth Balance Spread. It looks and tastes exactly the same.

It also works well when you spread it on the outside of bread when you’re making a toasted sandwich.

Perhaps the scariest idea about going vegan is losing your dearly beloved pizza.

Not to worry. Many pizza parlours are beginning to offer delicious vegan options (if worst comes to worse, you can simply ask for no cheese).

Even Pizza Hut is now offering a vegan option.

You can also buy pre-made pizzas in the supermarket from Daiya. Up there with a potential pizza crisis is the thought of no longer being able to eat cheese. Fortunately, there are a bunch of vegan cheese companies now racing to replicate the exact same flavour and melty experience.

The most prominent brand is Daiya, which offers Cheddar, Mozzarella and Pepper Jack. Incredible, their cheese really melts and goes well in pasta, pizzas and burgers.

Nutritional yeast is another good substitute for cheese, which is unprocessed and also contains vitamin B12.

10. Yoghurt for the Highly Cultured

Another plug for Daiya here (we swear this post isn’t sponsored - they just happen to have awesome products). Their vegan greek yoghurt is creamy and delicious. You can choose from peach, strawberry, blueberry, cherry and vanilla. The eggless “Just Mayo” spooked the old food world so badly that Unilever dropped a lawsuit on the company behind it, claiming that they couldn’t describe it as ‘mayonnaise’ since it doesn’t contain egg.

Call it what you like, it’s delicious on sandwiches and makes a good salad dressing.

For a slightly “healthier” option, try a coconut ice cream or sorbet. For extra points, stick a frozen banana in a blender and add cacao for a delicious after-dinner treat. 13. Don’t get Bitter Over Chocolate

Finally, we have chocolate. Never fear, all you need to do is stick to the dark stuff. Typically it starts from 75% cocoa right up to a very bitter 95%.

Just be sure to check the label for whether or not dairy milk is included. If you see “cocoa butter”, rest assured that it’s still vegan.


Stage Your Approach, Modify Your Habits and You’ll Succeed

A small minority of vegans were able to change their lifestyle immediately, but for most people, a staged approach of a period of weeks or months will be much easier.

It’s also important to see a vegan lifestyle, not as a challenge, but as an opportunity to explore a new culinary world that’s better for the animals, the environment and your health too.

Of course, if you already eat a very healthy whole-food plant-based diet then you can skip most of the above. If like most people you have a fairly typical diet, then you can gradually shift to healthier vegan foods as you adjust to the lifestyle.

Finally, make sure that you’re getting the right nutrients! Check out our multivitamin ingredients page for our take on the most important vitamins for a vegan diet. 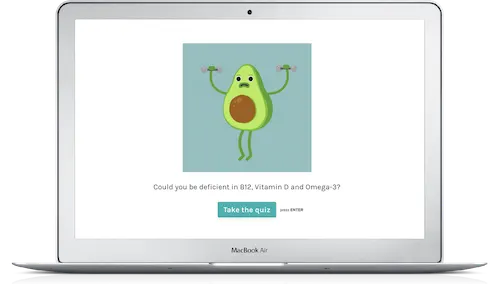 Vegan nutrition quiz
Not feeling 100% on your vegan diet? Answer our 15 fast and simple questions to help identify whether you could be at risk for a deficiency.
Take The Quiz